Hardly a century has passed, since the printing crafts had been revolutionary reformed by Gutenberg’s invention when the first ecclesiastical printed material was published in Hungarian, in Debrecen in 1561. Péter Méliusz Juhász Calvinist preacher and Gál Huszár printer made their first book which contained the explication of St. Paul’s letters. Fostering the culture in national language, augmenting its values and preserving the art of books have been strengthening the bonds between the printers and the town for the last half millennium. Generations of masters and artists of printing profession brought home or spread throughout Europe the most up-to-date professional knowledge. Furthermore they were outstanding figures of the spirit of their age.

The large-scale book production started in Debrecen from the 60’s of the last century and now we produce over eighteen million books a year. Books were produced here with sheet-fed and web-fed offset printing first in the country, here started off the hot-melt adhesive binding beside the thread sewing, here were produced colour daily newspaper with offset technology first. Today, we can provide the full range of printing and binding from the paperback books to the demanding hard-covered publications with the application of the most up-to-date equipments and technologies. In addition to the traditional literary publications, we reached significant increase in the market of domestic school books, high quality albums, colour magazines, commercial printed matters also. 70% of our products are books, 30% commercial products. Our aim is to obtain the best of our partners by manufacturing high quality products within short deadline.

Beside the domestic market, the export proportion is significant also. The Alföldi Printing House has been present at foreign markets for four decades. Today, fifth of the production is sold to other countries. In the recent years, we have regularly participated at the national and the most significant foreign book fairs.

December 1560: Gál Huszár, Protestant itinerant preacher escaped from Kosice to Debrecen to avoid the persecution of the Counterreformation and took his printing press equipment with him. He completed the printing work on his Book of Psalms, which he had started in Mosonmagyaróvár. With a new press put into operation, chronologically the ninth printing house of Hungary became established.

May 1561: The printing of the first product of the Printing House in Debrecen began. The work was ‘The Explication of the Letters of St. Paul’ by Péter Melius Juhász. The works issued in the first few decades were mostly religious in theme. With his more than thirty works Melius Juhász was the most prolific writer of the printing house.

February 1571: András Komlós, head of the printing house moved the plant to its first well known locale, to the newly purchased estate in Péterfia Street. The building erected here gave home to the office block and the small street right behind it was named after the printing house. In the sixteenth and seventeenth centuries it was named Angiportus Typographie, in the eighteenth century it was renamed Könyvnyomtató köz (Printing Drive) and on December 31st, 2008 (when the street fell victim to the new urban planning scheme) it was called Nyomtató (Printing) Street.

1618–33: After a series of lawsuits about who should inherit the printing press, the Municipium took possession of the plant, which had been private property before. From this time on the head of the printing house either rented the typography or became the highly respected employee of the town, typographus civitatis. Debrecen maintained and exercised strict censorship over the printing press. The office was complemented by a book binding workshop.

1671: The printing house of Sárospatak, forced underground, was brought to Debrecen and the City Council adopted it with a list of supply.

1719: The renovated printing house was destroyed by fire.

1720: The Municipium had the new house of typography made in the building of the City Hall.

1855: The first fast press was put into operation, which was followed by two more in subsequent years.

1905: After considerable technical innovations the town leadership made a decision: ‘the municipal printing press, as an independent industrial unit, would be run separately in the future’, in other words, it was to become a modern plant of its own standing.

1910: Of all the printing presses operating in the countryside, the one in Debrecen installed typesetting machines firstly.

1918: The continually expanding printing house no longer had sufficient room, therefore, the estate of the Metalworks on Böszörményi Road was purchased, which gives home to the printing house even today. Here, after a grandscale renovation project work was resumed in.

1924: A complete modern bookbinding workshop was added to the existing establishment. This step contributed to the downfall of the hitherto prestigious firm, Dávidházy Bookbinding.

1941–the beginning of 1944: As a result of the widescale modernization the printing house started operating altogether 42 motorized machines and the number of the total staff exceeded 170 people. The printing house had business partners, with the hundreds of commission agents, all over the country.

1948: The corporation was nationalized and placed under the Ministry of Light Industry.

1949: The nationalized national corporation was renamed, hence: Alföldi Printing House. The Ministry provided it with the equipment and premises available in the Bika (Golden Bull) Block downtown, previously owned and inhabited by the Party of Smallholders.

1960: With the eighty apprentices the total staff numbered about four hundred.

1964: The state financed the construction of a new plant, warehouse and culture hall as well as extended and modernized the equipment.

1967: The first web offset printing machines were installed, which made the production of coloured daily papers possible for the first time in the country.

1970: To supplement the increased printing capacity a new bookbinding technology was introduced, which applied hot melting glue. The productivity of the printing house is best demonstrated by the fact that 25% of all the books made in Hungary were produced by the Alföldi Printing House in Debrecen.

1975: Photographic typesetting was introduced. The printing house developed an own up-to-date technique for computerized wordprocess. The Szabadság (Independence) Printing Press, previously run by the Municipium was taken over by the Alföldi Printing Works.

1976–78: In the new hall, built as a result of a grandscale investment from own sources the Cameron-Sheridan machines, the most productive book producing system of the world, was put into operation.

The middle of the 1980s: The enterprise set up plants specializing in bookbinding, typesetting and printing in Püspökladány and Hajdúböszörmény. This was the period when the number of staff was the biggest (1052 employees) and productivity culminated in 44 million books.

1990: Hot metal composition and letterpress printing technology, which had previously applied the former technique was no longer in use.

1996: The quality assurance system of the printing house obtained the certificate ISO 9002.

1998: The greatest percentage of the shares became the property of the management and the workers.

2001: The hitherto used labour intensive technology was replaced by modern, up-to-date processes, which were innovative in prepress.

2002: By introducing digital printing machines with colour number 1+0 and 4+0 the most up-to-date multiplication method was also adopted within the old walls of the printing house.

2001–03: The printing capacity was extended by applying offset machines with colour number 4+0 and 5+0.

2004: Bookbinding was facilitated and made more productive by new hardcover bookbinding equipment. Plate making was modernized and besides the traditional method a digital machine was also put into operation.

2005: The introduction of an integrated quality- and an ISO environmental management system.

2008: Funded partly by EU support, but predominantly from own resources the printing house carried out considerable modernization, new bookbinding machines were installed in the new plant. As a supportive gesture of environmental protection the company, which uses several tons of paper each year, joined the concept of responsible forest management by obtaining the FSC certificate.

2018: A new house was built for preparing the sheets for the printing. This building is air-conditioned and suitable for storing 960 pallets. 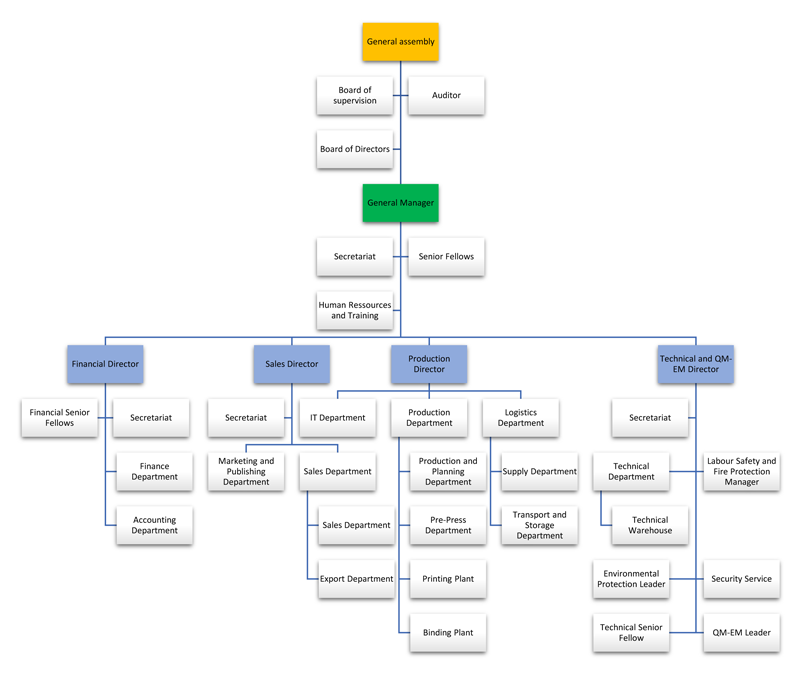